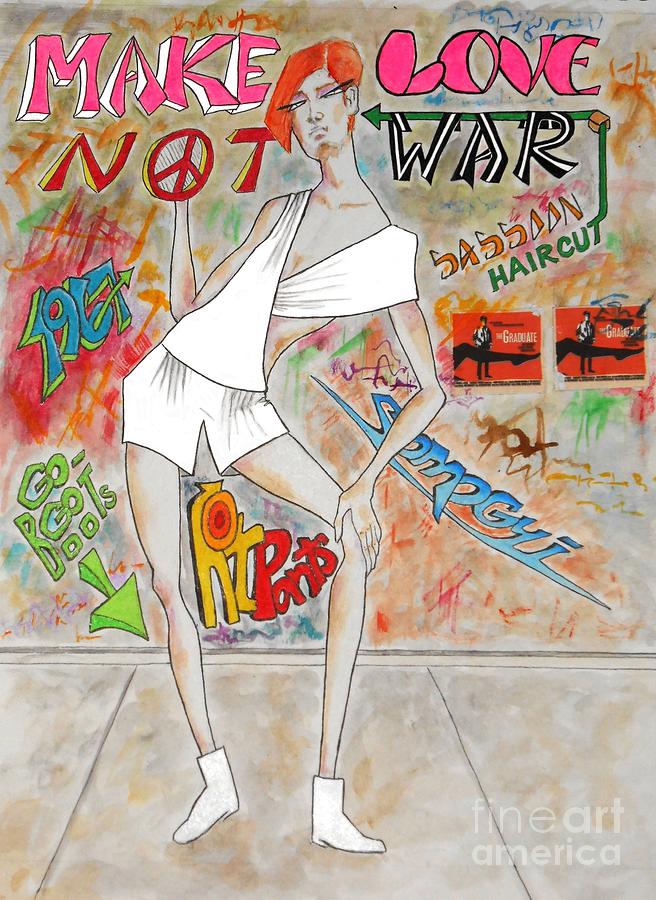 This original painting is currently for sale.   At the present time, originals are not offered for sale through the Jayne Somogy - Website secure checkout system.   Please contact the artist directly to inquire about purchasing this original.

The Sassoon haircut, peace signs, white go-go boots, hot pants, anti-war demonstrations, graffiti—the hallmarks of the mid- to late-1960’s, and it’s all here in this painting, featuring an outfit I designed in 1967. In the spirit of full disclosure, this artist (moi) DID wear go-go boots, DID wear hotpants, and DID have a Sassoon haircut, exactly as depicted here. And “The Graduate” (film posters on the right), starring a very young Dustin Hoffman, was the highest-grossing film in 1967, winning an academy award for Best Director.

Congratulations, your creative and unique art work is Featured on the homepage of the "Out Of The Ordinary 1 A Day" group! 7/4/21 l/f/pin My era! :)

Thank you for the feature, Lyric, and the L/F--so much appreciated.

So creative and full of sass, Jayne!!! Congratulations, your work is Featured in "Mix Your Media"! I invite you to place it in the group's "Featured Image Archive" Discussion!!

Taphath, thank you for the feature and the comment. I'm kinda full of sass, too! ;)